How can I enjoy my writing more?

It’s some weeks since my last post, and I’m still debating whether I want to write another book. It could help if I could pin down why the prospect feels problematic. What is it that fills me with trepidation?

I’ve already accepted that my recollections of the past year have been coloured by my fall down the stairs just over a year ago and all its consequences – temporary immobilisation, pain, frustration, endless physiotherapy. I’m almost back to normal fitness now, but it’s been a long haul.

The content of last book was difficult too. I chose a backdrop – the catastrophic Foot and Mouth outbreak in Cumbria in 2001 – that required very careful research and a balance between authenticity and fear that the ghastliness of it all could overwhelm the ‘front story’. The research was painful, but I live in a farming community and couldn’t get the details wrong. 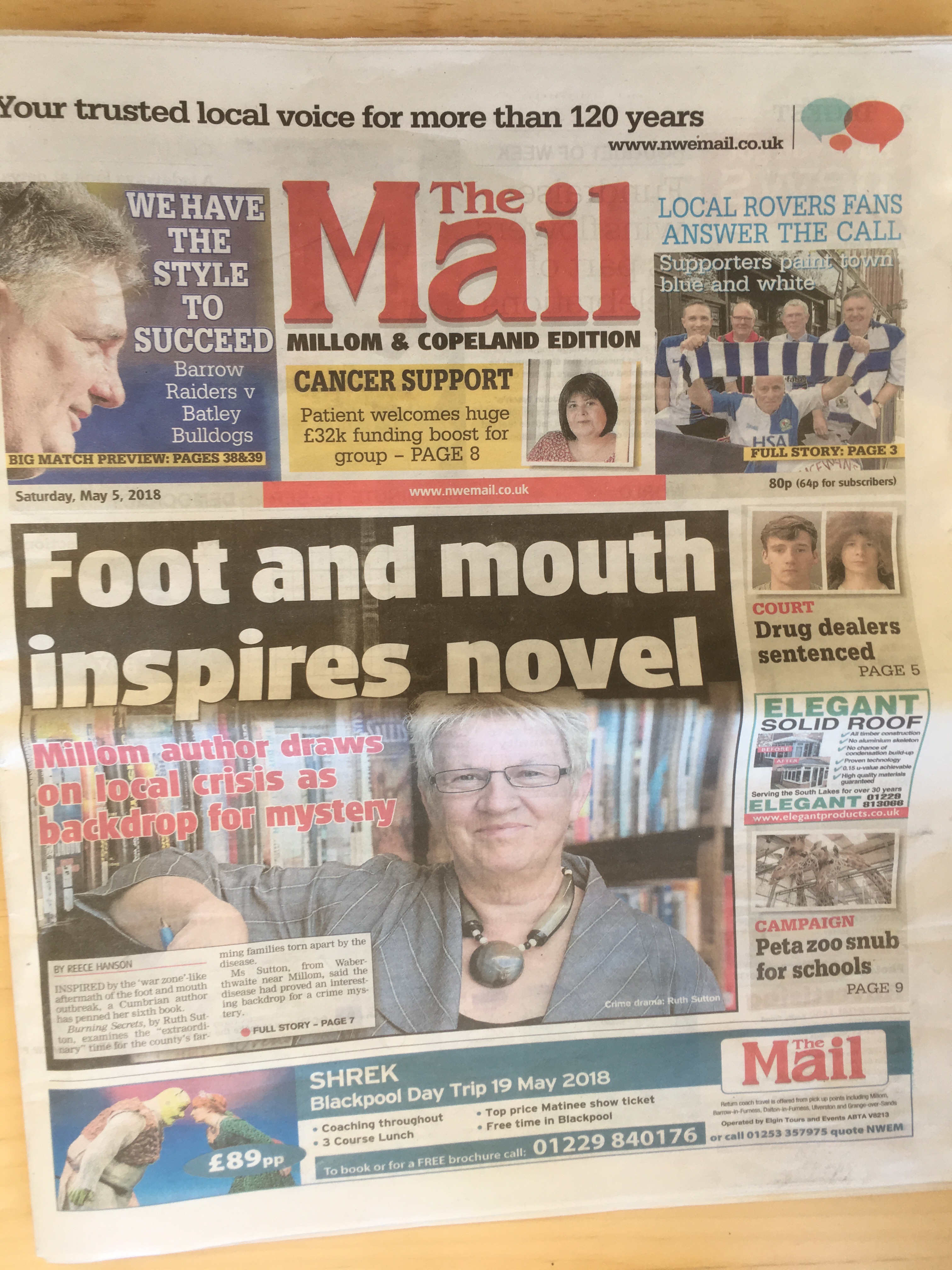 I was also working with a new editor, which was fine in the end but felt different than the well-worn relationship I’d had earlier. The new editor is very experienced in what makes for successful commercial genre fiction, but sometimes her expectations clashed with my obsession with authenticity. Yes, her ideas for a scene or the ending would be exciting, but if they felt ‘unrealistic’ I couldn’t go along with them. It’s quite a strain to pay someone for their advice and then decide to ignore it. And when I did agree with her, after the first draft, our shared view required a complete re-write of the first quarter of the book, which I didn’t enjoy at all.

For all these reasons, and probably others too, writing the last book rarely flowed easily. I had a deadline, and achieved it, but when ‘Burning Secrets’ finally emerged it didn’t excite me, even when it was clear that readers enjoyed and some think it is my best to date.

Looking back, I think I was so taken up with the research that I didn’t spend long enough on the structure before starting the first draft. So the writing stopped and started, got stuck and had to be rescued, and in the end had to be hammered into submission by some agonised re-thinking of the final scenes. Very stressful. If I could summon the patience and imagination next time to create a better detailed outline, that would definitely help to enhance the writing experience, and avoid painful rewrites further down the line.

Now I have the Arvon writing course to look forward to, which starts on September 10th. I signed up for this particular as the focus seemed to be on structure and plot, which is exactly what I need. I’m going with an open mind to see if help, advice and an undivided focus will clarify the future enough for me to stop writing without regret, or carry on.

In darker moments I think about the boxes of unsold books stored in my writing shed. While I have a new book to promote, sales of all the books tick along nicely. If there’s no new book, will I still be able to sell the backlist? I don’t necessarily need the money, but those boxes could haunt me for a long time.

I have two places to work. If the weather’s really good, or if I want to immerse myself with no distractions at all, I pack up the laptop and whatever materials I need and walk the 50 metres down the garden to the writing shed, the one I blogged about earlier. If it’s hosing down or very cold and windy and I don’t want to venture outside I use the alternative indoor space, facing into a cupboard in my bedroom that I’ve arranged as an ‘office’ with a computer table and book shelves. It’s where I’m sitting now. Behind me is a spectacular view across the Esk valley and west towards the sea. Facing into the cupboard I can’t be distracted by the glory of the Western Lake District – or at least that’s the theory.

Pinned on the wall of this tiny space, directly behind the monitor, is the only letter I’ve ever received from a famous author. It’s quite old now and the ink is beginning to fade from black to brown, but it’s important to me, not just for what it says but more for the fact that the famous author took the trouble to write it.

Plenty of people have read my books over the past two years. Those readers who’ve spoken to me about them have been very positive, but the feedback has usually been about the overall impression, ‘couldn’t put it down’ and such like, which is gratifying but non-specific. The letter in the fading ink is more of a critique, and not all of it complimentary. The author was someone I had heard of and read, and who lives locally for part of the year. I got her address from a friend and wrote to her, unsolicited, asking her to read my first book and to say what she thought of it. And she did, good and not so good. It was my first novel and I knew that it wasn’t good enough, but after four years I had to decide to ‘finish it’ or throw it away, and finishing it meant getting it into print, which I did, and I’m glad I did, even though I still wish I could have managed yet one more draft.

The author’s letter was dated May 2nd 2013, less than a year ago, although it feels much longer. Since then I’ve written and published a second novel – which was much better – and the third goes to the printers tomorrow. There have been ‘reviews’ in the sense of articles in the local press about the details of the plot how the books came to be written, but nothing that could really be called a ‘review’, written by someone as knowledgeable as the author of my fading letter. It’s rare and difficult to get a self-published book reviewed, or so I’m told. Local media say they don’t have the time or the staff to do it, and national media seem to focus only on conventionally-published books.

I suppose what I really want is recognition from a professional writer or reviewer who is prepared to read my books and take them seriously, not just as a slice of regional life but as a literary work – or is that too pompous? There is a person, another writer with northern connections, who has said that she will read and review the whole trilogy, which would be wonderful, but it’ll be a while yet before that can happen, and I’ll just have to hope that she follows through.

The ultimate frustration came in a conversation with the books editor of a national magazine who said she couldn’t review the forthcoming book because it is part 3 of a trilogy, and she couldn’t review the trilogy because the other two parts aren’t ‘new’ publications. Maybe I should give up yearning for any professional feedback and be content that so many people have read and enjoyed the books so far. I wish that was enough, but I fear not.

Just after I moved into my house here in the south-west corner of the English Lake District I designed a shed to be built at the end of the garden. It was insulated and double glazed, and therefore useable year-round, not just a summer house. The first roof blew off in a southerly storm, but the company replaced it for me and learned valuable lessons, they said, about how to combat the weather. When it was built I wasn’t a writer. But now I am, and the little ‘shed’ has become my writing place. When I work out how to take a photo, download from the camera and upload into my blog, I’ll post a picture of it.

As I walk the fifty metres from my back door to the shed, something seems to happen in my brain. I switch from a multi-tasking busy person, partner, grand-mother, resident of our tiny street community, into a single focus writer. Currently I’m writing in the 1950s, so that’s where I am. The characters are my friends and family: I know them inside out, their feelings and reactions, on-stage and off-stage. It’s hard to remember that they are fictional fabrications. They live in that shed with me for about six hours a day.

The shed is cut off from contact with the contemporary world. There is no internet or phone access. It faces south, away from the house. The closest neighbours are next-door’s hens and the sheep in the field beyond the hedge. If I need information I add the question to the list of things I need to check when I return to the house and the real world. I have electricity  there for my laptop, a blanket for my knees or shoulders, and a little radiator that I switch on before my breakfast to warm up the space. If it’s sunny the big windows capture light and heat, but I have to adjust the screen to avoid the glare.

In the summer the double doors open onto a small patio, where the hot tub sits. I can’t afford to keep it on all the time, but it provides an occasional idyllic experience, especially on cold clear nights when the steam rises from the water towards the stars overhead.

There’s a big sofa bed in the shed, to sit and read, or even sleep through short summer nights. No people, no distraction. I’m so glad the shed is there. I love it.